Wounded landscape: how Norway is remembering its 2011 Utøya massacre

A Swedish artist has been selected to create official memorials at the sites of the 2011 Norwegian massacres carried out by right-wing extremist Anders Behring Breivik.

The competition, called Memorial Sites After 22 July, was won by Jonas Dahlberg, who will create three artworks at a cost of 27m Norwegian kroner (£2.7m) to the government in Oslo.

The most striking memorial is called Memory Wound. The 43-year-old artist has sliced a three-and-a-half-metre-wide slit into the Sørbråten peninsula, which faces the island of Utøya where Breivik killed 69 people. It marks a “symbolic wound” in the landscape.

One hundred cubic metres of the stone cut from Sørbråten will be transferred to the governmental quarter in Oslo, where another memorial will mark the spot where a car bomb was detonated by Breivik that resulted in eight deaths.

A temporary pathway in the capital, between Grubbegata and Deichmanske library, will also be made by Dahlberg, who will later take trees from Sørbråten to create a permanent amphitheatre in the government quarter called Time and Movement. 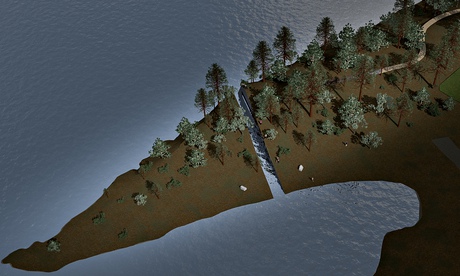 Breivik, now serving a 21-year prison sentence, told an Oslo court in 2012 that his victims – many of whom were teenagers attending the Labour party’s annual summer camp – were facilitating the “Islamisation of Norway“.

The jury for the competition, who reached a unanimous decision, included representatives of the Labour party and victim support groups. Dahlberg beat 300 other entries, including former Turner prize winner Jeremy Deller. Two memorials will be unveiled on 22 July 2015 – the fourth anniversary of the attacks – with the amphitheatre to come at a later date.

“It is a big responsibility and in many ways the most important work I have done,” Dahlberg told the Guardian. “I was already honoured to be considered when I was invited to be in the competition, so to have won now is a bit hard to grasp.”

The Swedish artist, who lives and works in Stockholm, said he hoped the memorial would provide a state of reflection through its “poetic rupture”. He said: “It should be difficult to see the inherent beauty of the setting, without also experiencing a sense of loss. It is this sense of loss that will physically activate the site.” 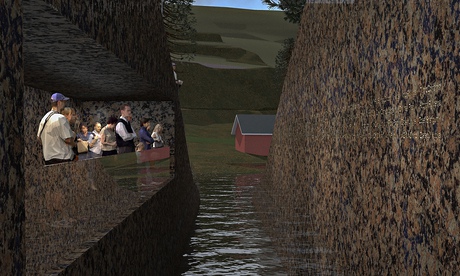 The names of all the victims will be inscribed on a wall in the ‘symbolic wound’ of the landscape. Credit: Jonas Dahlberg Studio

The headland of the Sørbråten memorial will be engraved with names of all the victims; visitors will be able to read them but not reach to touch them. “People will find their own way through the landscape around the cut,” said Dahlberg, “looking down at the channel and at the victims’ names from high up, or looking out to Utøya, establishing their own private ways of seeing and remembering.”

Mari Aaby West of the Norwegian Labour party youth league and John Hestnes, of the national support group for victims of the 22 July attacks, had passed on positive feedback from victims’ families who had viewed the designs, said Dahlberg, who did not speak directly to the relatives.

A statement from the jury for Public Art Norway, which included West and Hestnes, said Dahlberg’s idea to make a physical incision in the landscape stood like a “symbolic wound”.

It said: “The void that is created evokes the sense of sudden loss combined with the long-term missing and remembrance of those who perished. The proposal is radical and brave, and evokes the tragic events in a physical and direct manner.” 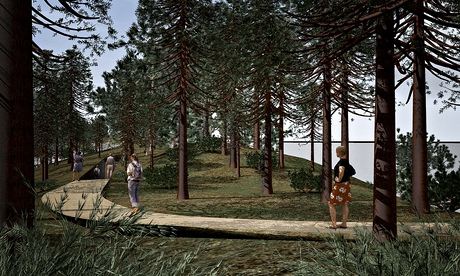 Walkway to the memorial site. Credit: Jonas Dahlberg Studio Designs for two memorials in the government quarter are not finalised, but Dahlberg explained his temporary pathway would lie beside an existing walkway, taking pedestrians off their usual path.

“The design physically relates to the interruption that occurred in the everyday life flow of Norwegian society,” he said. “Yet it is indeed everyday life that must carry on.”

Breivik received the maximum sentence available under Norwegian law. His prison term will be reviewed every two years after he completes a decade in jail.

This article was published in the Guardian online on March 6, 2014: “Wounded Landcape.”